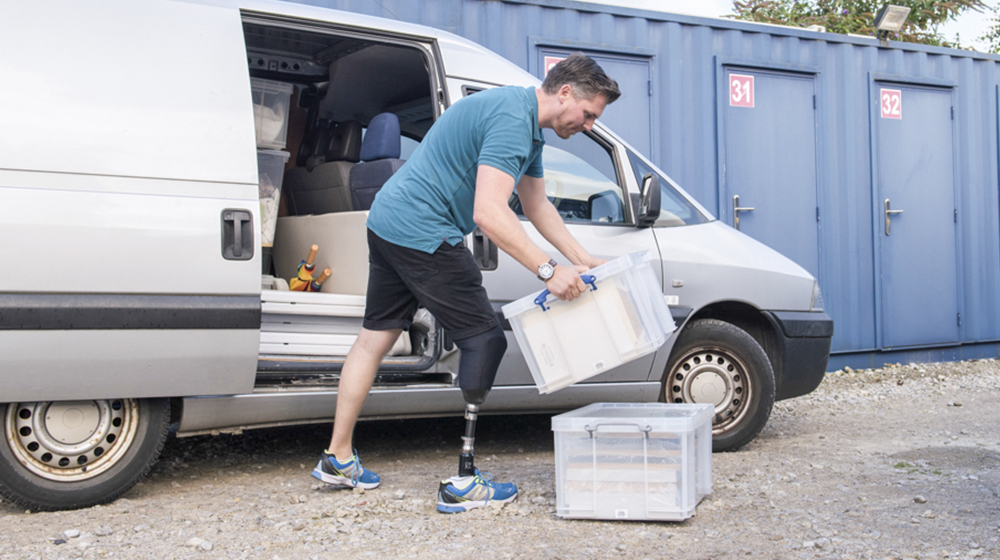 In July 2003, Lee Boxall, a designer and artist living in the historic city of York was involved in a motor-cross bike accident which meant undergoing multiple surgeries and having to spend over a year on crutches. After many setbacks, Lee was keen to move on with his life and made the brave decision to have a trans-tibial amputation which was performed in October 2004.

Whilst attending the Blatchford managed Newcastle Limb Centre, Lee wanted to start embracing life as an amputee. His drive and determination to do so meant that he was able to walk well soon after starting his rehabilitation and try to run on his prosthesis. It didn’t take long for Lee to set his next goal and in September 2005, less than a year after his amputation, he completed the Great North Run. Lee commented, “on reflection, I just felt that I had wasted enough time and just wanted my life back”.

Over the 14 years since becoming an amputee, Lee has worn a variety of prostheses and has noticed the improvements in technology with each one. He has found that EchelonVT keeps up the pace with his busy life, including long days selling his artwork at the York Market. Lee commented, “I can walk over the cobbled streets of York without having to look down constantly as the foot provides excellent terrain compliance.” Also, when Lee is loading and unloading for his market stall, he needs his prosthesis to be reliable and tough, the EchelonVT provides exactly that. Outside of work, Lee loves taking his Labrador Ruby out on long walks and with EchelonVT any concern for the terrain is alleviated.

Whilst at the Newcastle Centre, Blatchford Prosthetists Terry Tabner and Alastair Ward noticed Lee’s ambitious nature and the speed in which he could walk well and run on his prosthesis. Terry and Alastair subsequently approached Lee and asked whether he would be interested in becoming a demonstrator for limb centres around the UK, his answer was ‘yes’. Lee has now worked with Blatchford for around 12 years and has travelled to numerous shows, both in the UK and around the world. Lee commented, “working alongside Blatchford has given me the opportunity to give something back and gain an insight into the world of prosthetics I wouldn’t normally have”.

Lee added, “it’s been a pleasure working alongside the various teams at Blatchford over the last 12 years. I’ve been involved with such a variety of activities, everything from lab testing and gait analysis to educational programmes at universities and modelling at international shows. I’ve seen how far prosthetics have come in 12 years and I’m excited to see where Blatchford can take them over the next 12 years”.